“Memories were meant to fade. They’re designed that way for a reason.”  Mace, Strange Days (1995) 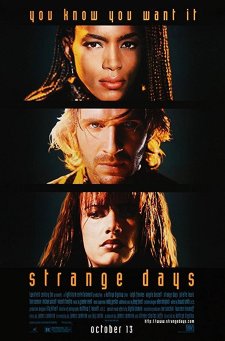 Strange Days, 1995, directed by Kathryn Bigelow, never got the acclaim it deserved. For that matter, nor has Bigelow.

Anyway, when Strange Days starts, our antihero has fallen on hard times in the aftermath of a love affair. He’s barely making it, a disgraced ex-cop addicted to a new illicit technology that replays the recorded experiences of others directly into your brain. He’s both an addict and a dealer in the underground market for experience clips recorded by people pulling robberies, having sex, racing cars, or simply being whoever they are that you aren’t.

Clips are illegal in Bigelow’s dystopian LA, both because they’re addictive and because people stage socially destructive experiences in order to make them. Other people’s experiences are what our guy sells, but they aren’t his vice; he obsessively replays clips he made of himself with the girl he lost, endlessly reliving their happy moments.

Elaborately contrived processes designed to inject complex emotional experiences into us aren’t science fiction, of course. That’s what music, video, theater, sporting events, church services, and advertising all do. These industries account for perhaps 6% of the gross national product of the US, and probably much more if you include the electronic infrastructure that supports it all.

You might say, so what? We’re the richest society in history—we can afford it. And you’d be right. But the cost isn’t the real problem nor is the time and attention squandered consuming it, though both are considerable. The problem is more subtle. It’ll take a minute to explain.

Our individual capacity to feel isn’t something that just happens, like height. Yes, we’re all born with the capacity for basic feelings like love, anger, and desire, and each of us starts life with some idiosyncratic blend of predilections for these broad classes of feelings but we don’t spend the next eighty years passively soaking up experiences as they come. Throughout our lives, we react to experience and learn, folding the results back into who we are, continually altering that mix of predilections and desires, and adjusting what we will seek out in the future. Heraclitus, in the Fifth Century BCE, said that you can’t step into the same river twice. What he didn’t mention is that the river can’t get the same philosopher wet twice, either.

People have always known that we don’t just grow like turnips responding passively to temperature, light, and conditions of the soil. We have the power to choose our

experiences, or at least to choose the kinds of potential experiences that we put ourselves in the way of. The mysterious essence of us, if there is one, is not what the stream of experiences makes of us, but that unknowable, sub-rational something that makes the countless tiny choices to gradually become someone in particular over time, someone who could not ever exist again in all the infinite space of history.

Before nature v nurture was a question, the old wisdom was always that the two are inseparable, that within the limitations of our natures, each of us has scope to become something finer, or more wretched, or merely extremely particular. It’s a Christian view, but it goes back much further–it’s an Aristotelian view, and it was probably old wisdom when he wrote it down. We have lost much in losing that insight because it was a powerful model for much human behavior.

For example, right-thinking people now insist that addiction and alcoholism are medical problems, plain and simple, and to sharpen that view, we set up a straw man who says “Addicts (or alcoholics or whoever) are bad people who should control themselves.”  But the pre-medical view was more subtle than that.

Before they were medicalized, these social pathologies were called “vices.” It’s a word that no longer has its old meaning. It didn’t mean simply bad habits or wicked behavior. It referred to destructive behaviors that start under our control, but that we feed and allow to grow until one day we find that they have ceased to be voluntary.  Dorian Gray’s voluntary descent from innocence into depravity and Blake’s poisoned tree preserve the idea of a once voluntary behavior gradually taking over our nature.

Habits, bad or good, are simple. A behavior gives us some kind of pleasure or reward, and we repeat it in order to be rewarded again.  If the behavior we repeat is undesirable, it’s called a bad habit, otherwise, it’s just a habit. We can break bad habits because there is still an independent person to break them.

A vice is more intimate—it starts as a habit but something goes wrong with the part of us that responds to that reward. The essence of a vice is that we begin to cultivate that part of us that responds to the stimulus and begin to remake ourselves in order to experience the behavior and reward more deeply. The old description of addiction as “a monkey on your back” is exactly wrong because it makes the addiction into something outside of the addict. It’s not just drugs–almost any stimulating behavior can get a grip on a person even if it’s not obviously pleasurable.  But “get a grip” also it backward. It is not the drug that grips us, but we who develop our grip on the drug, like that crazy guy at the office compulsively squeezing the exercise ball.

Ceremonies, theater, stories, and music have always been used by societies try to steer the choices we make by structuring our experiences. We’ve always had these things, but never before has a typical person been able to spend literally every waking moment living emotions structured by others.

This hasn’t come to be overnight. The first generation was printed matter.  Then came movies in the early 20th C. followed by radio, in 1930’s and television, in the 1950’s. Then car radios, records and tape, portable transistor radios and finally, in the 1980’s, the Sony Walkman. But even then, you had to at least think about what you wanted to listen to and carry the tapes with you.

In the last fifteen years or so the ubiquity of entertainment has taken off to a level unimaginable even in the 1980’s. Spotify and Pandora know what you like better than you do, and can predict what you will like in the future. Their knowledge isn’t perfect a priori, but it hardly matters because they are continuously re-forming your tastes at the same time.

A limitless supply of video entertainment likewise flows to the consumer regardless of physical location, a vast interconnected web of imagined life.  TV plays in the bar, and in the elevator. It’s everywhere if you look up from your phone long enough to see it.

For many of us, only sleep shuts off the continuous inflow of other people’s emotions.

The very oldest people can remember the world before electronics, or even before movies had sound. Routine was the rule. There were cycles within cycles of the days, weeks, seasons and years. There were holidays, a religious calendar and celebrations, and each person advanced in age through the passages of life, but most human lives, hour to hour, had very little drama.

There might have been a few entertaining hours a week of church, movies once in a while, or music made on the porch, but there wasn’t any soundtrack to life. You constructed your emotions out of yourself.

Today, music or visual entertainment leads you by the hand through elaborate and stylized emotions for much of the day. The total quantity of emotion we actually experience surely hasn’t grown proportionately, because we still have the same bodies, glands, and nervous systems with which to respond, but the entire day is now filled, morning till night, with vicarious emotion conveyed to us fully formed. Even when the input is a story, if it’s recorded, the emotional meaning is cued by the music telling us what to feel. Surely this reversal is a profound change in the human condition, all the more remarkable for being largely unremarked.

Old books show us how the capacity to generate our own feelings has withered. Literature from before the age of mass entertainment was incredibly emotional.

Jane Austen’s ladies and gentlemen feel more complex, nuanced, and powerful emotions upon merely entering the room with each other than can fit into a modern novel. It’s not that everybody overdid it all the time back then—what is different is that we longer feel either the volume or the nuances. It isn’t only in the arts.  You can see in the faces of people who don’t yet live in the modern world or who have only recently come to it that they have far more vivid emotional lives than people of the modern urban world.

It may not be the sheer volume of ersatz experience, per se, that is the biggest or most culturally dangerous change technology has wrought. If the fundamentalists are right, and the Devil walks the Earth, the ground he is walking on is in Silicon Valley, not Hollywood.

Our innate propensity for self-reinforcing experiences is now abetted by an artificial intelligence infrastructure and entertainment industry that notices what we like instantly and offers us more and more of it. There are hundreds of thousands of computers singlemindedly devoted to egging us on.  It’s as if every time one takes a step, the ground underfoot tilts slightly downhill in that direction and the faster one goes, the more steeply it tilts.

This is why I went on and on about vice and addiction. The oldtimers would have said that all vice is solitary in nature even if it involves other people because the intimate process of embracing it occurs entirely inside us. But the oldtimers didn’t have computers. Today, we’re increasingly automating that process of embracing the stimulus. Networked artificial intelligence discovers what gives us a jolt more effectively than we can do it ourselves, and a dozen forms of media compete to deliver it. Mouse, keyboard, phone, and remote control complete the feedback loop, telling the brain in the sky just how effective each new offering has been.

We’ve automated vice, but there’s another side to it.  Our tastes, differentiated, honed and refined with the aid of computer feedback, let each of us develop idiosyncratically in a way we never could before. There is no broadly shared experience—each of us goes down a path we choose largely uncorrected by the need to cooperate with others.  Increasingly, it is as if each individual is now a mini ethnic group of one, developing a monadic culture along whatever peculiar path through the endless universe of media that the iterative cycle of personal taste and the engine of algorithmic culture selection dictates.

We’ll see how this cultural experiment plays out.  Very likely, the philosophers of the Paleolithic doubted that society could withstand living in towns. If so, the stone-age doomsayers were right. Societies did not survive the move into towns—they were dissolved and reborn as something completely different.

The algorithmic delivery of synthesized experience has shown unprecedented power to dissolve traditional social bonds and our emotional lives, but it can’t literally make us into monadic ethnicities.  We will surely coalesce into something yet unseen, something like the chaos of tribes that once existed, but now woven together by electronic, rather than physical, proximity.