When I was a little kid, this comic scared the bejesus out of me. 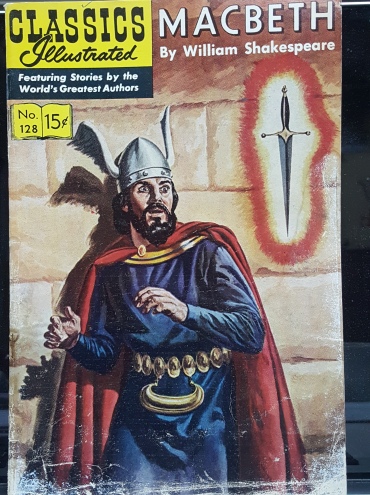 If you have forgotten how the story goes, Macbeth starts out as an OK guy but develops into the Idi Amin of Scotland. With his wife egging him on, he murders his way to the throne and later wipes out a host of innocents to keep the regicide from coming to light.

He becomes king but guilt slowly drives the couple mad. Lady Macbeth becomes obsessed with cleaning the blood off of her hands but no matter how many times she washes them, she can still see the stain and is eventually driven to suicide. It was she who had first promoted the scheme, with Macbeth only reluctantly going along, but he is quickly corrupted and slips from being merely weak to becoming truly evil. The three weird sisters who prophesied it all also told him that he can’t be killed by any man born of woman, so he thinks he’s safe if he can only keep his nerve.

In the comic, a veil is drawn over all of the actual killings except for the final fight between Macbeth and Macduff, so you don’t see much violence in the comic. You are shown what comes just before the dirty deed, then in the next frame you are told that a man has been killed in bed, a family has been murdered, servants knifed, etc. There are no gory illustrations.

The thing is, it wasn’t the story per se that scared me. It was a particular picture. 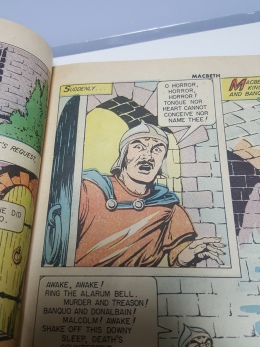 My parents taught us all to read very when we were very young. I had read the comic through the first time, but after that, I could not bear to see this one image. I was in elementary school, but I made trips alone to the drug store determined to throw the comic wide open to the terrible page, yet never could. I’d sidle up to the comic on the stand and spread the pages just a little from an arm’s length away, and peer in, searching for this picture, but couldn’t bear to face it head-on.  I’d look in from the side, till I found it, then lose my nerve and back away.

After all these years, I finally screwed my courage to the sticking point and ordered the comic from Amazon. I lay it on my desk and boldly flipped through the pages (in the daytime with the sun streaming in.) There, finally, was the picture that had haunted me. It was the one where Macduff cries out in horror after discovering the murder of the king.

Are all kids completely insane? I wasn’t a scared kid. It’s just a guy bursting through the door with a look of horror on his face. I read gruesome comics galore with no problem. Stacks of them. Horror stories of Edgar Allen Poe and Ambrose Bierce. It was just this one image. Or maybe it wasn’t the image, but the words he’s speaking.