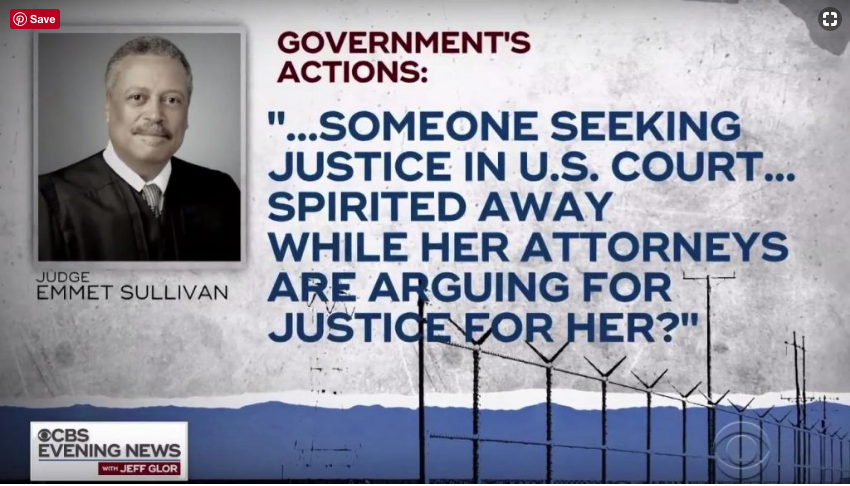 “This is pretty outrageous,” U.S. District Judge Emmet G. Sullivan said after he was informed about the flight, the Post said. “That someone seeking justice in U.S. court is spirited away while her attorneys are arguing for justice for her?”

He threatened to jail Jeff Sessions for contempt if the plane wasn’t turned around. It duly was, reportedly after it had landed.

I’m not a lawyer but I’m quoting the following document Obstruction of Justice: An Overview of Some of the Federal Statutes That Prohibit Interference with Judicial, Executive, or Legislative Activities which was issued by the Congressional Research Service in 2014, and was written by Charles Doyle Senior Specialist in American Public Law.  Every American should read it.

This isn’t some crackpot fake-news agency or liberal think tank. They’ve been part of the Library of Congress for 104 years, and exist so that lawmakers will have access to authoritative, non-partisan analysis of complex issues. In other words, this is a government document designed to inform non-specialist lawmakers about the meaning of the law.  You will note that the same author produced versions without all the footnotes so don’t be intimidated by all the legalese.

The point is, if this document seems to say something is a crime, it would take some pretty fancy lawyering to make it not a crime because it’s intended to instruct the Congress of the United States on the meaning of the law.

Doyle explains the Federal Laws on Obstruction of Justice with admirable clarity.  Spin down to page 18 which describes what is called the “Omnibus Provision.” The title is Obstructing Federal Courts (18 U.S.C. 1503).

This is a “catchall” that, translated into plain English, says that pretty much anything you do that is intended to thwart the operations of the courts is a felony regardless of whether you thought up some wrinkle that isn’t covered explicitly.  There is one exception we’ll mention below.  The meaning is pretty clear:

Whoever corruptly or by threats or by force influences, obstructs, impedes, or endeavors to influence, obstruct, or impede the due administration of justice, shall be punished as provided in subsection …

The fact that the federal statutes don’t cover this case explicitly doesn’t matter. That’s what section 1503 is explicitly designed for. The footnotes in the document contain the following to underscore the purpose of 1503 as a catch-all.

United States v. Richardson, 676 F.3d 491, 502 (5th Cir. 2012)(internal citations omitted)(The omnibus clause was “drafted with an eye to the variety of corrupt methods by which the proper administration of justice may be impeded or thwarted, a variety limited only by the imagination of the criminally inclined”);

Doyle summarizes the legal requirements for a successful prosecution under this statute thusly.

The courts often observe that to convict under this omnibus or “catchall” provision the government must prove beyond a reasonable doubt: “(1) that there was a pending judicial proceeding, (2) that the defendant knew this proceeding was pending, and (3) that the defendant then corruptly endeavored to influence, obstruct, or impede the due administration of justice.”105 Some also assert that the obstruction must also be material to the matters before the judicial proceeding.106

This isn’t some technicality. All by itself, even attempting to thwart the activity of a Federal court is good for up to ten years in a federal penitentiary. But this involves a conspiracy to do so, which is a crime all by itself.  It also used force to do it, which is covered separately but may not be prosecutable because the wording of the law didn’t quite anticipate this level of lawlessness by Federal officials, let alone the Attorney General.

Even if you are deluded enough to call the current special prosecutor’s activities a witch hunt, this clearly isn’t. The Attorney General and/or his employees, appear to have conspired to obstruct justice in the most egregious way possible by illegally deporting the subject of an active judicial proceeding.

If this were any other organization in America doing this, the offense would be prosecuted, very likely under RICO, given the number of people who had to conspire to pull it off.

This isn’t bribery or some kind of bureaucratic monkey-business. It is an allegation by a Federal Judge that the Attorney General attempted to derail an ongoing judicial proceeding by simply removing the defendant from the country.  It’s the highest kind of misdemeanor imaginable. The Executive branch attempting to thwart activities of the Judicial branch using physical force.

The Inspector General’s office should investigate instantly and if the situation even remotely resembles the judge’s interpretation of the events, a special prosecutor should be appointed.

I'm a long-time programmer and distributed computing enthusiast. I did pre-sales and post-sales engineering and consulting for Hortonworks, which is the most comprehensive distribution of Apache Hadoop and allied open source big data projects. I'll be going to work this Spring for a smalle IoT startup that's still in stealth mode. I also paint and make sculpture, and run the Web sites sculpturewiki.com, timeandmaterial.com, and hadoopoopadoop.com. View all posts by Peter Coates

One thought on “Seriously? Contempt of Court?”