I wasn’t a reflexive Kavanaugh hater when this started. His politics are deplorable but they are pretty much of a piece with those of anyone else who was in the running. His evasive responses to virtually all questions were dismaying but they were not much worse than has become customary in Senate hearings. 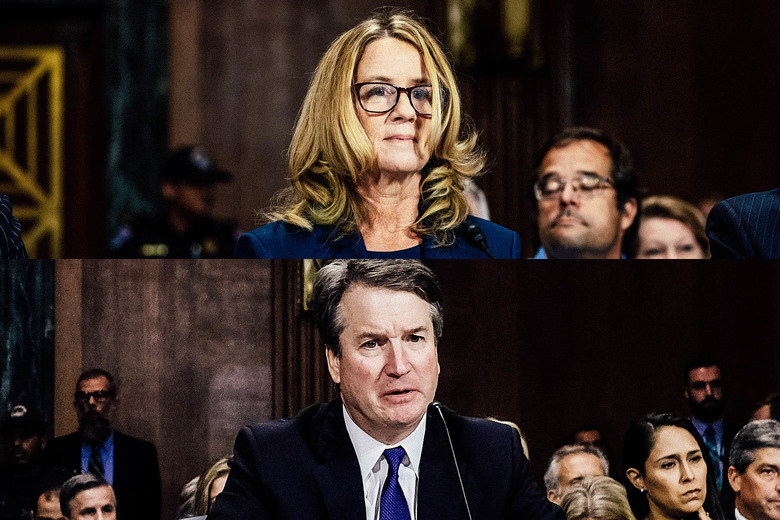 The spectacle only strayed into the bizarre with Kavanaugh’s response to Christine Blasey Ford’s testimony. Who carries on like that at a job interview, attacking and insulting the interviewers, raging, crying, acting hurt, citing massive conspiracies to get revenge for work he did for Ken Starr twenty-some years ago?  You can lose touch with how weird that performance was.

Even if you had turned the sound off, it was obvious which one was telling the truth. But I hope you had it on because the details of her story powerfully backed up the general impression of honesty and forthrightness that she projected.

I’m ten years older than Kavanaugh, but I grew up in a Northwest D.C. neighborhood that sent many of it’s sons to Georgetown Prep and other high-end D.C. Catholic prep schools. The words of Ford and Kavanaugh, the passages from Mark Judge’s book, and the yearbook extracts evoked an eerie and unhappy sense of familiarity. I probably had a beer or two with the older brothers of some of those very guys when I was 15 or 16. Hearing about this sleaze, I had a dismaying sense that the 1970’s left that nasty little niche society untouched.

People who haven’t bumped into that intense subculture won’t have any good way to gauge how twisted it is. Even a lot of the people who attended those schools probably won’t fully get it because it was a little hothouse that never included everyone. The drunken, bellicose misogyny that Ford, Judge, Ramirez and others describe was endemic to a particular stratum of the athlete crowd: the heroes of institutions without women.

It’s no accident that William Golding’s Lord of the Flies was about boys and not girls. Absent explicit structures to curtail and discipline their instincts, boys and young men automatically tend to form packs, and it is rarely pretty.  Political correctness wants us to believe that gender differences in personality can’t be innate but if boys learn to be boys, they must do it at a level so primitive that for practical purposes it is indistinguishable from DNA. The most basic function of civilization is disciplining male energy. Without that, human society is just an endless cycle of one little band of guys murdering another little band.

I was a public school kid, not one of the Catholic prep school athletes, but we crossed paths often. The drunken packs of guys riding around on the weekend nights, going from party to party stirring up trouble. Sometimes there were no parties and they’d end up in some isolated parking lot or out in Cabin John or somewhere, splitting a case of beer. Those nights were practically an institution.  People had colorful nicknames. It was a very specific culture.

People dwell on the misogyny, but there was also endless brawling and bullying of other young men. Don’t picture a bunch of knuckle dragging morons though. These are mostly well-off guys at very exclusive schools; they’re often highly intelligent and certainly better educated than their typical public school counterparts. They were drunken thugs for sure, but thugs who joke around in Latin. Even in the late 1960’s it was out of another time, nothing like the post-Care-Bears high school environments of today. Kavanaugh’s and Judge’s school days must have been among the last of an old tradition.

With that background given, there are some very specific details that convince me that Ford’s account is accurate, things that are hard to believe it would have occurred to  anyone to make up.  Though a psychologist, Ford confines herself entirely to factual reporting—she leaves making sense of it is entirely up to the listener.

Ford said that the boys corralled her into an upstairs bedroom as she was heading back from the bathroom.  The shoved her into the room and onto the bed, locked the door, then turned up the music to cover any cries for help.

Fords remembers their laughter vividly.  The laughter is telling because it means attempting to tag-team a drunk teenage girl at a party almost certainly wasn’t a novel situation for either of them. A victim’s drunkenness gives a young man moral wiggle room room to convince himself that what’s going down is about her bad judgement and not him raping her; people are wonderfully flexible that way. But be that as it may, the first time any guy pushes his moral envelope that far, it’s intense; it’s not a moment for laughter. The intensity isn’t limited to rape or even crime. People hunting for the first time experience the same intensity. Men don’t laugh until it’s familiar territory.

Judge had certainly been sufficiently into the project to help get Ford isolated in the room, lock the door, and egg Brett on.   But then once they had her there, he inexplicably hung back. That’s odd. Why?—I mean, in for a buck, in for a bundle, dude. Nobody can know for certain what goes on in the mind of a 17 year old, but my guess is that some recess of Judge’s mind was sober enough to recognize that this time, the girl wasn’t drunk.  If Ford had been sloppy-drunk, whatever happened would be seen as her bad judgement and the boys would have known that she knew it too. But if she’s cold sober, it’s forcible rape of a fifteen year-old and that’s a whole different ballgame.

The instant he realized that she was sober, Judge would have known they were about to cross into scary territory. That’s why the laughter is key: it made sense as long as it was a drunken lark, but then suddenly it wasn’t.

The second telling detail is how it ended. No matter how bad an idea pushing on with it suddenly looked like, one of those guys can’t just stand up like Dudley Doright with his index finger pointing skyward saying “Unhand that woman, Brett!”  That would be a great way to get mocked and possibly punched for being such a pussy. Instead, Judge played the crazy-drunk card and jumped on the bed, ostensibly to get in the act, but actually to defuse the situation and turn what’s about to become rape into drunken horseplay.

Drunken puppy is a great strategy because it derails the felony train without implicitly admitting, either to her or to themselves, that anything serious had been going on; it’s fine to be a drunk idiot as long as you aren’t a pussy. Unfortunately, drunken Brett was too deep into trying to pull her one-piece off, so it didn’t quite do the trick. Accordingly, Judge redoubled his efforts so that everyone tumbled off the bed and onto the floor, allowing Ford to disentangle and flee.

You can almost hear “Dude, that was close” echoing in Judge’s head when she scooted out of the room. Ironically, there’s a good chance Kavanaugh isn’t lying when he says he doesn’t remember it, because the whole psychology is about moral wiggle room. She ran out with her clothes still on; no harm, no foul, just another drunken  night. Why would he remember it thirty years on? Once you’re into this stuff your outrage level shifts. It would have been a much bigger deal to her than to him.

With years of Jesuit teachers, the lads would have read their Socrates: “No man does evil knowingly.” I don’t know about “no man” but the principle is at work here.  It would be a mistake to think that the function of the alcohol is merely to render the woman passive for their use. That’s part of it,  but equally importantly, the alcohol provides that critical Socratic leeway. There’s a line to walk for the man who wants to look in the mirror and not see a rapist.  Yes, there are legal reasons why she has to be a slut and not a rape victim but the psychological motivation is self respect of the rapist.

I believe Dr. Ford because nobody making up a slanderous story would have gotten that dynamic so precisely, not unless they just happened to be a master of literary fiction. One lie is as good as another; she could have said anything. She could have said he did rape her or that he tried to rape her but passed out, or that he couldn’t complete the act. She could have said they both tried. She could have said anything, but instead she told a story as dense with subtleties and ambiguities as a haiku. A nasty little attempted gang-bang aborted by some quick thinking, face-saving buffoonery before it got into serious felony territory is exquisitely realistic, all the more so because she provides only the facts and doesn’t analyze the meaning. If Ford made that story up, she’s way to smart to be a mere college professor. Give the lady a book contract!