Skip to content
Geoffrey Chaucer, who lived through the black death, wrote the line “Ech man for himself, ther is non other” in The Knight’s Tale and it quickly entered English permanently as “Every man for himself and the devil take the hindmost.”

Every day I see despairing posts and re-posts of articles and blogs claiming that the pandemic in America is a lost cause. One post that is currently getting massive attention asserts that the epidemic in the USA is now in a runaway state that can no longer be brought under control. Another simply assumes that this is true, and concludes that Covid-19 will eventually infect everyone in America, killing 1% (3.25 million people) and crippling or otherwise disabling many tens of millions of us in gruesome ways.

None of it is true. The ubiquity of graphs like the one below make this feeling understandable on an emotional level but the despair it engenders is completely inconsistent with the facts. The appropriate emotions in response to the graph below are (a) fury and (b) hope.

By way of making the case for hope, I’d like to lay on you one of the most remarkable and under-publicized bits of research I’ve come across but first we need to look at some basics.

END_OF_DOCUMENT_TOKEN_TO_BE_REPLACED

I wasn’t a reflexive Kavanaugh hater when this started. His politics are deplorable but they are pretty much of a piece with those of anyone else who was in the running. His evasive responses to virtually all questions were dismaying but they were not much worse than has become customary in Senate hearings.

The spectacle only strayed into the bizarre with Kavanaugh’s response to Christine Blasey Ford’s testimony. Who carries on like that at a job interview, attacking and insulting the interviewers, raging, crying, acting hurt, citing massive conspiracies to get revenge for work he did for Ken Starr twenty-some years ago?  You can lose touch with how weird that performance was.

END_OF_DOCUMENT_TOKEN_TO_BE_REPLACED

We shouldn’t be thinking of Trump’s campaign shenanigans with the Russians and his payoffs to silence former mistresses as normal, Watergate-style scandals. Either of these clumps of mini-scandals would be enough to bring a normal  presidency crashing to the ground, but they are more likely to end up a footnote, remembered not for their intrinsic importance but as the threads investigators first pulled on that ultimately unraveled the Republican party and exposed the bizarre epochal political disaster that started America on an historic decline as a world power.

What’s going on is widely recognized as a scandal, but it’s not usually spoken of in such cataclysmic terms. Is this author overly excited or will we look back one day and feel that the mainstream press missed something obvious?

The media is struggling because what’s going is unprecedented. To be fair, everyone else is struggling too: law enforcement, our intelligence apparatus, the courts; even the KGB doesn’t know quite what to do. Trump’s Russia problem is morphing into that rarest political thing: something new under the sun.

END_OF_DOCUMENT_TOKEN_TO_BE_REPLACED

The release of Bob Woodward’s book Fear, about the state of Trump’s White House, and the nearly simultaneous publication in the New York Times of an anonymous op-ed piece telling much the same story from inside the Cabinet, make it clear that the end is approaching.

These stories of White House chaos come just as three currents of history are about to crash together. Mueller’s investigation, the November elections, and Trump’s impatience are headed for a three-way pileup that could see the Pence family decorating the White House Christmas tree this year.

The pivot point for the scandal is November 8th, the first business day after the election. The chaos, corruption, and buffoonery of Trump’s first two years make Democratic control of the House next year likely, and even control of the Senate now seems like a possibility. With a Democratic majority in the House, the tide will truly change against the Republicans and the President.  Investigations can’t be strangled and impeachment becomes a serious option. At that point, the Republicans will have less than two months to salvage what they can.

END_OF_DOCUMENT_TOKEN_TO_BE_REPLACED

Ordell tells Melanie that too much weed will sap her ambition. Melanie responds, “Not if your ambition is to get high and watch TV.”   Jackie Brown, 1997.

As a society, we’re in the process of accepting the obvious truth that pot is never going away and that impairing hundreds of thousands of lives with criminal prosecutions is cruel and wasteful.  Decriminalization is a good thing.

What’s not a good thing is letting decriminalization blur into officially normalizing pot use by setting up a government-approved infrastructure for distribution so that we can tax it.  Is there no middle ground between imprisoning people over something and giving that thing the government’s seal of approval?

END_OF_DOCUMENT_TOKEN_TO_BE_REPLACED

“This is pretty outrageous,” U.S. District Judge Emmet G. Sullivan said after he was informed about the flight, the Post said. “That someone seeking justice in U.S. court is spirited away while her attorneys are arguing for justice for her?”

He threatened to jail Jeff Sessions for contempt if the plane wasn’t turned around. It duly was, reportedly after it had landed.

END_OF_DOCUMENT_TOKEN_TO_BE_REPLACED

Messing with the Left is the political equivalent of beating up your little sister. It’s not even sporting but it’s still interesting to see each new variation on the old familiar theme. The Right has it down to a science; is the Left never going to catch on?

If you set out to gin up a bogus controversy that would maximally distract the people on the Left while twisting the indignation of the Second Amendment crowd to a fever pitch, you just can’t beat 3-D printed guns.  No aspect of the controversy makes sense, yet the forces of darkness have millions of people fretting about it instead of worrying about things like why the EPA is being gutted or why it’s America’s new policy to drive Turkey out of NATO and into the loving embrace of Vladimir Putin.

END_OF_DOCUMENT_TOKEN_TO_BE_REPLACED 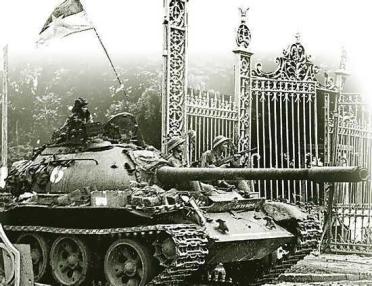 More than ever before, our shared world is constructed of images. We talk a good game about facts  but the connection between our collective memory and history as documented by journalists and historians is more tenuous than we ever imagine.

Take the pictures on this page, for example. I’ve shown them to dozens of Americans over the last few years and nearly everyone recognizes them as the fall of Saigon. It’s not too surprising; how could anyone forget the day America lost the War in Vietnam, that frightening and humiliating day in

Like the Challenger disaster or the burning World Trade Center, these pictures are burned into the memory of a generation.

END_OF_DOCUMENT_TOKEN_TO_BE_REPLACED 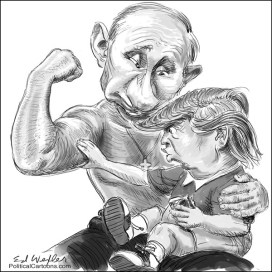 We’re only a little more than 1/3 of the way through the first term of the Trump presidency and it already bids fair to end the tenure of the United States as the world’s preeminent superpower.

Until recently, it felt to me like we might be in for a full four years of Donald Trump but just lately things seem to be coming to a head.

Accordingly, I want to get my predictions into print now so that some day in the near future I will be able to either (a) crow insufferably about how prescient I was or (b) laugh ruefully about how the very worst we could imagine in those days was nothing compared to how it ultimately turned out.

END_OF_DOCUMENT_TOKEN_TO_BE_REPLACED

People reflexively compare Donald Trump to Hitler, but they have the wrong German.  It’s Kaiser Wilhelm that the Donald is freakishly like.

The similarity goes far beyond their extremely distinctive hair. (Trump’s elaborate blond comb-over is easily matched by the Kaiser’s trademark handlebar mustache with tips that stood straight up an inch high on the ends.)

The Kaiser’s power, like Trump’s, was unearned; he inherited the throne, while Trump fell into the presidency through a freak accident of history and demographics. Popularly perceived as foolish, Trump, like the Kaiser is actually reasonably intelligent, but also like the Kaiser, he convincingly simulates stupidity through his combination of extraordinary vanity, a comical level of arrogance, a negligible attention span, and legendary immaturity.

Trump famously surrounds himself with yes-people of mediocre talent. How like the Kaiser, who, soon after coming to power, fired Otto von Bismark, one of the great foreign policy geniuses of modern history. It was Bismark who had forged the German Empire out of Prussia and an assortment of minor German states and principalities, but the Kaiser wanted him out of the way so he would be free to pursue a militaristic course that was more or less opposite to the peaceful course Bismark had wisely set.