I just reread Michael Shaara’s classic novel of the Civil War, The Killer Angels (1974.) It won the Pulitzer Prize in 1975 and was wildly popular with readers from across the political spectrum; it remains one of the great novels of the Civil War. It’s a fascinating story, beautifully told, but rereading it in a time of political polarization that rivals the political climate of the 1850’s, there is a new level of poignancy, not so much about that ancient battle, but about how we, the reading public, have changed. 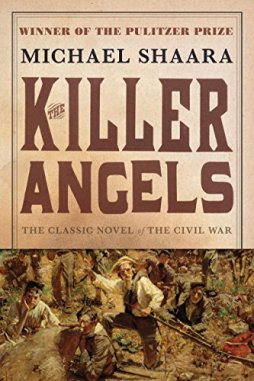 Today, conservatives and even grumpy liberals bemoan the prissy falsity of PC speech, and it is loathsome, but it is easy to forget how bad, and how recent, the bad old days were.

History moves at different speeds across America. As a Yankee, I think of 1974, the year  The Killer Angels was published, as modern times; The Velvet Underground and the Beatles had already come and gone, the moon landing was history, the great March on Washington was more than a decade in the past, and Martin Luther King himself had been dead for six years. Modern times.

Yet, much of the country was still rooted in the old days. The last of the “Whites Only” signs had only just been taken down in the South. I know they were still commonplace in the mid-1960’s South Carolina, so maybe some were still up, for all I know. END_OF_DOCUMENT_TOKEN_TO_BE_REPLACED

I’m no kind of engineer or industrial design guy. I do make a lot of physical things, but it’s mostly artworks, and old fashioned artworks at that—stone and wood carving. Nothing much has changed in those media in 150 years, and even then it was just power tools to speed up the same things they already did.

It’s perverse to live in the 21st technological Renaissance, and limit yourself to materials and techniques that have been around since the end of the Bronze Age. With this in mind, I recently borrowed a Makerbot Replicator 3D printer, downloaded a program called Fusion360 and set about joining the 21st Century. (I’m lucky to have friends who can lend a guy a printer!)

Holy $%^#!, but this stuff has come a long way. Forget the printer—Fusion360 is a potential career killer. Don’t even start playing with it unless you’re prepared to get obsessed. It’s magic, really. It takes a little time to get the basics, but it’s a nice shallow learning curve and you can start building simple designs the first day.

END_OF_DOCUMENT_TOKEN_TO_BE_REPLACED

It’s almost impossible to get through to young people how egregiously they are getting screwed. The current economic situation crept up so slowly that you can only see the broad strokes when you look back over decades.

It’s like the frog in the cook pot, but in this case, the frogs aren’t just sitting there—they are loudly cheering the cook. It’s beyond the wildest dreams of the rapacious classes of yesteryear.

What follows is my personal perspective on what young people in 2018 can’t see because their frame of reference is too short. I know it’s boring, but it’s your money, people. I wish you’d think about it.

END_OF_DOCUMENT_TOKEN_TO_BE_REPLACED

What The Bible Says

I checked, and you can too. We have a problem.

What the Bible says about how we must treat travelers and refugees in distress does not change by an iota from Leviticus to Luke. The Old Testament and Jesus are perfectly eye-to-eye.  The Bible’s position is very simple: cruelty to travelers, immigrants, or strangers is categorically forbidden. Not just cruelty, but indifference as well; both Testaments specifically require believers to actively show refugees and travelers kindness, feed them, take them in, etc., even at one’s own personal expense and inconvenience.

There are really two Christian issues going on with immigration today. The first is how the Bible says Christians must treat refugees, and the second is how the Christian obligation to obey civil laws applies.

The first question couldn’t be easier. Malachi 3:5, (see below) sums it up succinctly. The Lord of Hosts emphatically lumps in people who turn their backs on refugees in need with the lowest of the low. If you don’t speak 17th C. poetical English, in modern terms, the verse is God talking. He is poking His people in the chest with a giant index finger and telling them to be warned, that on Judgement Day, if you’ve been evil to immigrants and refugees, he is going to make it his personal business to be a witness for the prosecution. In that context, you hardly need a specific rule against making an example of refugee families who are applying for asylum by seizing their children and imprisoning the parents without trial; it literally goes without saying. The prophet Malachi presumes the reader is not a complete idiot. END_OF_DOCUMENT_TOKEN_TO_BE_REPLACED

You’ve probably heard of the “Internet of Things”—the cool kids call it IoT—but if you’re like most people, all you know is that it has something to do with kitchen appliances that can order groceries for you.

Like so many of us, jaded by decades of technological miracles, for years I mostly ignored IoT as just another TLA in the never-ending cacophony of buzzwords, but now that I’ve put some time into learning what it’s all about, the scales have fallen from my eyes.  It’s not just smart coffeepots and burglar alarms the call your iPhone. I’m coming around to the view that it’s ultimately going to rival the Internet itself in scale, and may well result in epochal changes to the human condition.

END_OF_DOCUMENT_TOKEN_TO_BE_REPLACED

“Memories were meant to fade. They’re designed that way for a reason.”  Mace, Strange Days (1995)

Strange Days, 1995, directed by Kathryn Bigelow, never got the acclaim it deserved. For that matter, nor has Bigelow.

Anyway, when Strange Days starts, our antihero has fallen on hard times in the aftermath of a love affair. He’s barely making it, a disgraced ex-cop addicted to a new illicit technology that replays the recorded experiences of others directly into your brain. He’s both an addict and a dealer in the underground market for experience clips recorded by people pulling robberies, having sex, racing cars, or simply being whoever they are that you aren’t.

Clips are illegal in Bigelow’s dystopian LA, both because they’re addictive and because people stage socially destructive experiences in order to make them. Other people’s experiences are what our guy sells, but they aren’t his vice; he obsessively replays clips he made of himself with the girl he lost, endlessly reliving their happy moments.

END_OF_DOCUMENT_TOKEN_TO_BE_REPLACED

A startup called N-Gen technologies is running an interesting crowdfunding campaign for a natural gas-fueled, Stirling engine-powered appliance for generating your own electricity at home. N-Gen doesn’t use the S-word in their fundraising materials but they do in their patent (more below.) They claim it’s going to change the world, cutting out the power company and letting you generate your own power safely and efficiently, immune from power failures.  Could it? Hard to be sure, but they have working prototypes, and it’s nifty technology. The crowdfunding prospectus is worth a look; it reads like the disclaimers for a pharmaceutical ad. Who knew there were so many ways to lose your money?

Before we look at this claim, what the heck is a Stirling engine, anyway?

END_OF_DOCUMENT_TOKEN_TO_BE_REPLACED

The Lightning Network, now coming online, is being touted as the savior of the increasingly sclerotic Bitcoin infrastructure. It is not a new coin, but rather a way of using Bitcoins, and purports to solve, or at least mitigate, several of the most grievous problems Bitcoin is exhibiting as it matures: rising transaction fees, agonizingly slow transaction confirmation, severely limited scalability, and exponential growth in the cost of maintaining the blockchain.

I’m only going to summarize enough here to make some points about the project. You can get a nice rundown in layman’s terms from Wired.  Probably the best source, if you have some technical background and not much time, is the Lightning Network’s page, which has a recorded presentation that summarizes the underlying mechanisms at a level somewhat above the cryptography. If you really want to understand the gruesome details, try the original paper. The cryptography is not developed from the ground up, but if you have the basics already, it’s very readable. There’s also a brief piece in Bitcoin News about the first real-world purchase using Lightning Network, which happened earlier today (January 21, 2018.) END_OF_DOCUMENT_TOKEN_TO_BE_REPLACED

I just watched Jackie Brown again. It’s a great movie—maybe Tarantino’s last good movie before all the silliness. Made in 1997, but it takes place in 1995. So many little things have changed. Holy $#*+! it’s already a period piece!

I was just (January 3, 2018) checking on today’s price for Bitcoin—what can I say, I’m morbidly fascinated by the spectacle of thousands of people shooting craps with their retirement savings—and was once again struck by the sheep-like acceptance of the term “market cap” by financial wonks. Does nobody else object to the crypto-currency mafia appropriating this term and using it in a wildly misleading way? It is the miracle of decentralization that nobody is legally responsible for the sales pitch.

First of all, the idea of market capitalization applies to equities. It is the number of outstanding equity shares in a company multiplied by the current price of a share. Its main use is for sorting companies into buckets by size, with the aggregate value of the shares being a rough proxy.